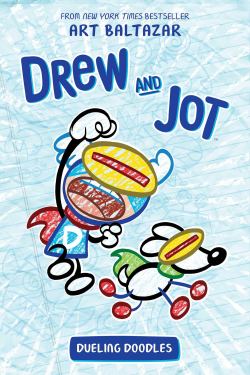 Andrew and Foz’s sketches seem to come to life in a notebook where they draw the amazing adventures of Drew and Jot. It’s a world of two best friends saving the day—that is until Andrew’s sister gets her hands on his notebook and now suddenly, Drew and Jot are about to face a villain that even their creators never dreamed of. (from publisher)

[Drew and Jot] “A fiery rock propels itself towards earth! A planet soon to be in peril.”

Drew begins fifth grade and is not sure about making new friends. He sits down and takes out his sketchbook, immediately drawing the attention of Foz, who also draws his own comic books.  Interestingly, both boys have the same sketchbook, each received from their father. The boys decide to draw a crossover comic staring Drew and Jot (aka “the good guys”) against Foz’s Dr. Danger (the “bad guy”). Everything is going fine until Drew’s little sister commandeers Drew’s book for the night and adds her own character, Bombastic Fantastic (“the most powerful in the world”). Fantastic asks Drew and Dr. Danger if she is a good or bad guy. But Danger makes a smart aleck remark instead, sending Fantastic into a tizzy fit, sending both Drew and Danger spinning. Looks like those two will need to team up to destroy Fantastic before they can finish their crossover comic. But will Pasty allow this to happen?

Drew and Jot is a unique graphic novel trilogy. The comic portion of the book looks drawn by a kid, which adds to the entire feel of the book. Those comic pages sure stand out. Kids will love those pages and all the movement most pages show. The colors saturate the page then go back to original white when depicting Andrew, Patsy, and Foz (oh, and the real Jot) in their real lives. Both stories are fun, though the emphasis has been on the comic crossover.  Dr. Danger and Bombastic Fantastic add many different characters, mostly monsters and aliens. Drew and his super-dog Jot fight them and mostly win. I like that Drew is actually Andrew’s alter ego and Jot is the name of Foz’s huge dog (a happy coincidence—or is it not?)

Kids will love this trilogy. I suspect after reading just Dueling Doodles, kids will try writing and drawing their own comic. I had the same idea but don’t have a blue covered sketchbook with a cat on the front. This seems essential, given that both boys have such books. A mystery surrounds those two sketchbooks. A mystery that might also explain how Dr. Danger, after ripping out of the comic and flying away, flew back, rejoining the story to its bitter end (for him). Now caught, Drew can collect the keys to the city and move up in the world of superheroes. I am anxiously awaiting the secret concerning the boys’ mystically identical sketchbooks.

Readers will anxiously await the second book in the Drew and Jot series, (as do I), and then the third and (maybe not?) final book (as do I). Boom Studios might want to start offering those blue covered sketchbooks so those who want can start their own comic book on the right track. I wonder if the cat on the covers has any future meaning for Drew, Jot, Fantastic, and Dr. Danger. Will the Bombastic Fantastic remain on the side of good? Or will she flip, joining Dr. Danger in his awful pursuits? Cannot wait for Drew and Jot, Book 2 to find out what happens next.   Drew and Jot may be the best graphic novel for kids yet released.

I read Dueling Doodles in one sitting, unable to close the cover until the very end—which I loved. It is most unexpected in a soft, plushy way. Also, I like how Drew turns his keys to the city into his and Jot’s world headquarters. I think Drew and Jot are the first superheroes to explain how a hero gets the idea for and then constructs their headquarters.

Illustrations Rendered in crayon and digitally

[I am an Amazon affiliate. When you purchase through a link on KLR, you are supporting Kid Lit Reviews. For each sale, KLR makes a small commission, which costs you nothing extra. This is an easy way to show your support for this site, without using your own money. For each commission received, I gratefully thank you.]