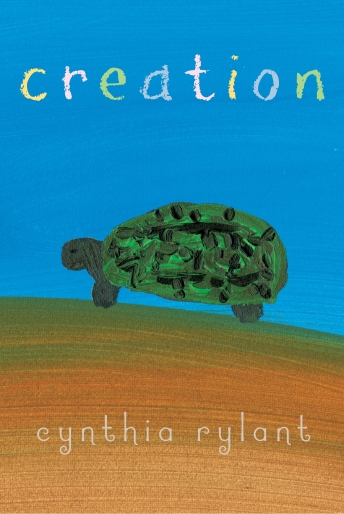 .
“In the spirit of her acclaimed Dog Heaven and Cat Heaven, Newbery Medalist Cynthia Rylant illustrates the King James Bible creation story in a simple yet powerful folk art style.

Cynthia Rylant takes the familiar text of the creation story, as told in the King James Bible, and lovingly illustrates it in her simple but bold style that has been called “stunning” by School Library Journal. In striking illustrations reminiscent of folk art, Rylant has created a fresh take on a classic story that will appeal to readers of all ages.” [PUBLISHER]

Review
“In the Beginning . . .” Creation brings the first two chapters of Genesis—King James version—alive for young readers. Rylant’s minimalistic artwork is charmingly innocent and reminiscent of art produced by children themselves. Her acrylics on watercolor paper are brilliant; capturing the simple, innocent appeal of the world’s beginning, bringing it to a child’s level. Adults may not see the illustrations as dynamically as children,yet it’s there. If Genesis had been written as a picture book . . . images like these would have been perfect.

Brushstrokes capture movement of sky and water. A whale’s blowhole, fruit on trees, beasts (represented by a dinosaur) walking on land, birds flying in a breeze, and creepy-crawlies creeping. They all come alive by the stroke of Rylant’s brush. When God rests on the seventh day, the stars in the sky remain in continual movement.

Adding to Rylant’s child-like approach is the text, which looks handprinted, especially the first capital letter on each double-page spread. Children will readily find Creation appealing, whether they have heard the Genesis story or not.

Rylant may have created Creation but children will claim it as their own. From Sunday school to home, Creation helps children understand “In the Beginning . . .”