Junior Library Guild Selection
.
“Fannie Sellins (1872—1919) lived during the Gilded Age of American Industrialization, when men like Andrew Carnegie and J. P. Morgan wore handmade suits and clothed their wives in furs while their laborers wore rags. Fannie dreamed that America could achieve its ideals of equality and justice for all, and she sacrificed her life to help that dream come true.

“Fannie became a union activist, and she worked to create Ladies’ Local 67 of the United Garment Workers of America. She also helped organize unions for the coal workers in West Virginia and Pennsylvania. Fannie traveled the nation, calling for fair wages and decent working and living conditions for employees in both the garment and mining industries. Fannie’s courage and compassion helped pave the way for labor reform in the United States—and the effects of her hard work live on today.” [INSIDE JACKET]

Review
History books are full of famous people who have accomplished extraordinary things. History books also lack many influential people in niche markets who helped changed the way Americans live and work. One such person was Fannie Sellins. Fannie lived during the industrial revolution and the days of powerful men like J. P. Morgan, Andrew Carnegie, and John D. Rockefeller—all famous industrialists who helped America grow. 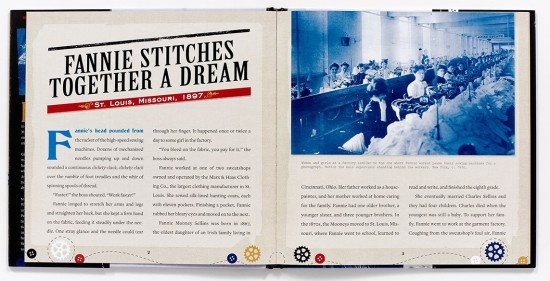 Fannie was never a friend to these men, and probably not well liked by them. As they and others grew their steel, clothing, coal, and other businesses, Sellins was trying to make the playing field between owner and worker more equitable. Fannie Sellins was a union organizer—activist better describes her work. This meant much more than it did in the fifties.  Sellins helped families survive while on strike, made sure workers’ children had proper clothing, shoes, and food. She was moral support for the wives and tried to keep the contentious field between owners’ hired guns and strikers peaceful. It was extremely difficult work. Unimaginable work. In the end, angry “police” took Fannie Sellins’ life in a one-sided heated battle, in cold blood. 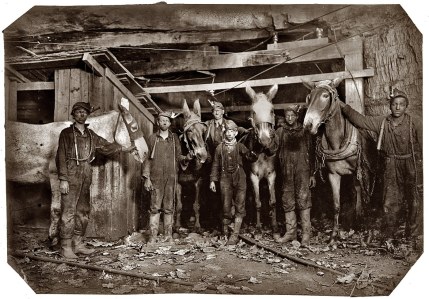 Fannie Never Flinched is apropos for a woman steadfast in her ideals and unwavering in her support of those who trusted her. Readers will learn of a woman most history books never mention, but should be between those pages under unsung heroes. She helped improve the working conditions and the wages of American workers in her original field of garment sewing and other fields such as coal mining and carpentry. 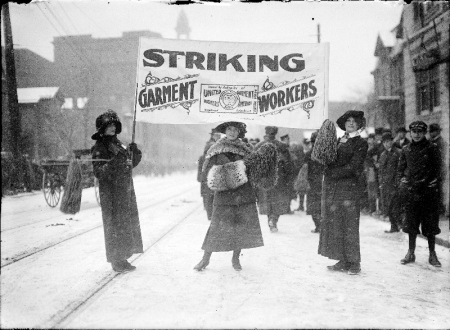 Sellins fought for children, many of whom never went to school, but instead worked to help feed their family. Teachers will find Fannie Never Flinched a wonderful adjunct text while teaching the industrial revolution or the beginnings of organized labor. Filled with actual newspaper clippings—still readable—photographs, and eyewitness testimony, Fannie Never Flinched is mesmerizing. 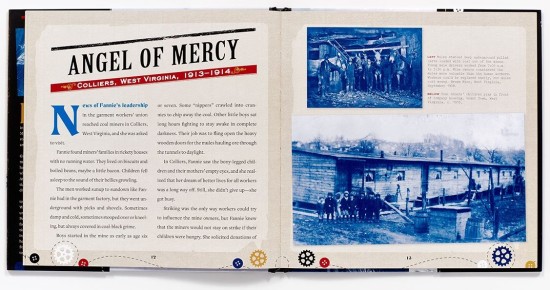 Mary Cronk Farrell wrote Fannie Never Flinched for kids, in a manner easily understood by the age group intended, and for adults, who will find Sellins story heartbreaking, deplorable, unjust, sad, and un-American. Farrell does not take sides when writing about the incident in which Sellins lost her life. She writes the facts as though she were there, ace reporter, after-the-fact—which she was. Yet, thanks to all her trustworthy research, what happened on that awful day is easy to surmise and horrible to believe. Not every hero survives. More importantly, all of Fannie Sellins hard work on behalf of the average American worker, children, and families is no longer lost.

Mary Cronk Farrell, thanks to Fannie Never Flinched, and her other titles, may be one today’s most influential and important historian in children’s literature.

Also by Mary Cronk Farrell
Irena’s Children: A True Story of Courage [McElderry Books, Sept. 2016]
Pure Grit: How American World War II Nurses Survived Battle and Prison Camp in the Pacific [Abrams, Feb. 2014]
Journey to the Top of the World: How One Woman Found the Courage and Commitment to Climb Mount Everest [Crown, 2012]