One girl’s wonder brings us to the edge of the ocean. Her imagination takes us over the water.

“What do you think you’d find on the other side of the ocean?

“Tall skyscrapers and funny animals? Pink houses and thousands of ships? Friends and fairs, snow and stars? What if over the ocean is someone just like you?

“This spare, poetic book from beloved children’s book creator Taro Gomi celebrates the long-lived reign of imagination in the kingdom of a young child’s mind.” [inside jacket]

Review
As three seagulls fly by, a little girl looks out upon the ocean, wondering, and then imagining, what could be on the other side, “over the ocean.” Could there be more ocean, with many more ships? Maybe there are farms, cities, and small houses with kids living in them. As the young girl images more and more she never moves an inch from her beginning stance. She stands pensively, hands behind her back, hair wind-swept, and always still. That is the bottom third of each spread. 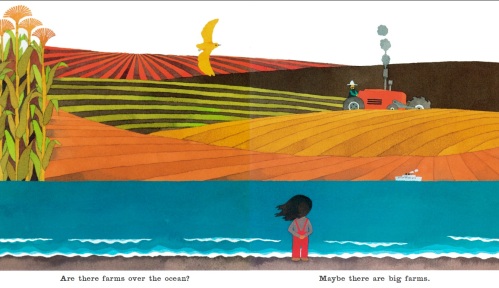 The top two-thirds of each spread changes with girl’s imagination. Are the kids friendly? Are there bullies? Looking at the spread, at least one child does not smile and his eyes look sharp. Is he a bully? A lone ship began its journey on the girl’s right and is now slowly crossing the horizon. When it reaches the gutter, the girl wonders if fairs and fun rides exist over the ocean.

The gorgeous illustrations keep the spreads lively. Kids will have much to see that will beg of them to imagine what else might be Over the Ocean. A tall city, with buildings composed of colorful stripes and squares; houses defined by differently colored roofs; kids of various diversity. Over the Ocean can be any story the reader desires.

Taro Gomi, a prolific writer with over 350 published children’s books, originally published Over the Ocean in Japan, in 1979 (Umi no Mukô wa by Ehonkan, Inc.). Thirty-seven years later, Over the Ocean returns in a glorious picture book full of beauty, wonder, and awe. There is so much for children to enjoy. With illustrations to entertain the eye and text to question the brain, young children will be busy deciding what Over the Ocean means to them.

On the final page, the ship finally gone, the young girl watches as another, identical girl, floats by in a hot air balloon. The young narrator wants to travel over the ocean. Her alter ego does just that. Children will have many questions and have just as many answers to what the girl sees and wonders. Does the story continue? Will the girl land Over the Ocean?

Her childhood and her imagination remain intact, as she watches herself float off the page.

OVER THE OCEAN. Text and illustrations copyright © 2016 by Taro Gomi. Reproduced by permission of the publisher, Chronicle Books, San Francisco, CA.

Find Over the Ocean on Goodreads HERE.

.
Full Disclosure: Over the Ocean by Taro Gomi, and received from Chronicle Books, is in exchange NOT for a positive review, but for an HONEST review. The opinions expressed are my own and no one else’s. I am disclosing this in accordance with the Federal Trade Commission’s 16 CFR, Part 255: “Guides Concerning the Use of Endorsements and Testimonials in Advertising.”