#884 – Night at the Stadium by Phil Bildner and Tom Booth 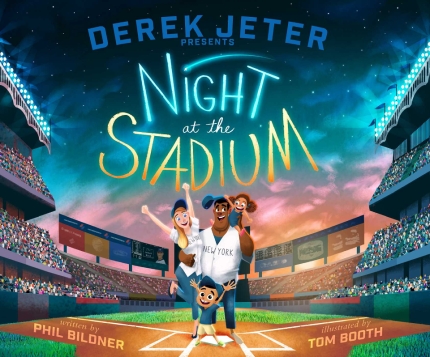 “Watching a game at Yankee Stadium is Gideon’s idea of the best day ever, especially when his favorite team wins! Now that the game is over, he’s going to get an autograph of his favorite player—but then Gideon gets separated from his family and tumbles into a secret part of the stadium. There he discovers a magical world where the rakes and hoses, the bats and balls, the food, and even the monuments in Monument Park have a story to tell. But can Gideon finally find his family and get the autograph he really wants?” [inside jacket]

Review
Gideon has just spent the evening watching the New York Yankees win their game. Now it’s time to get autographs, and there is only one autograph Gideon is missing in his autograph book—Derek Jeter’s. Almost immediately, Gideon realizes he has lost his autograph book. While trying to return to his seat for his book, Gideon gets jostled this way and that by the people leaving the stadium. Before he knows it, Gideon has lost his family.

Gideon stumbles through an unusual door, leading to a most unusual part of Yankee Stadium. These internal tunnels lead to all sorts of interesting places, but Gideon is more interested in finding his way back to his family. Will Gideon find his way back, given the lack of good directions he receives? Will he get the one missing autograph he needs for his book? Is what Gideon finds under the stadium real, or just his imagination?

Night at the Stadium is a cute sports book even without the actual sport. There is no game here, it is over and time to go home. But young kids who love baseball understand true fans don’t go home, they go to the lockers for autographs. If there is anywhere else young fans would like to venture, it is under the stadium, home to things we don’t get to see, but we know they matter. Gideon gets a chance to see the bowels of the stadium, but it is much different than any young kid has ever imagined it to be.

Gideon is a sympathetic character and his immediate skepticism is nice to see. In the end, Gideon believes what he hears and his new friends help him find his family. Mom is naturally not happy. I love so much about this picture book. First, it is about baseball. That may not be review worthy, but it’s important to me and will be to young fans, especially those of the New York Yankees. I love the magic Gideon finds under the stadium. It is perfect for young children. What else would you expect to find inside the bowels of your team’s stadium, if not magic? Finally, I love that Gideon’s family is bi-racial.

Then there is the monument Gideon speaks to in Yankee Stadium’s Monument Park—Babe Ruth, the most iconic major league baseball player ever. The illustrations are fun and full of humor and imagination. Gideon faces arguing food and equipment including balls and bats in the middle of their own game. Booth keeps the spreads light and fun. The items Gideon encounters all have a comic book feel to them, except Babe Ruth. Booth gives Ruth the respect he deserves by portraying him as close to normal, without any comic grin as seen on the rakes and hoses, balls and bats, and food. Night at the Stadium is billed as a combination Alice in Wonderland and Night at the Museum. No false advertising there.

Night at the Stadium is a good book for young boys and girls who love baseball. Kids who’ve always wondered what happens under the stadium will find the magical tunnels funny and . . . possibly true? Gideon believes and by the end of the story, you’ll believe with him. Sunday being Father’s Day, Night at the Stadium would make a great gift for dad. Dad’s generally like baseball. Kids generally like bedtime stories. Put those two together and you have a fantastic Father’s day gift—a wonderful sports book and special bedtime / story time with his kids.

Jeter Children’s Publishing is an imprint of Aladdin and Simon & Schuster.

.
Reprinted with permission from DEREK JETER PRESENTS: NIGHT AT THE STADIUM © 2016 by Phil Bildner, Jeter Children’s Publishing, an imprint of Aladdin and Simon & Schuster, Illustrations © 2016 by Tom Booth.

.
Full Disclosure: Derek Jeter Presents: Night at the Stadium by Phil Bildner & Tom Booth, and received from Jeter Children’s Publishing, (an imprint of Aladdin and Simon & Schuster), is in exchange NOT for a positive review, but for an HONEST review. The opinions expressed are my own and no one else’s. I am disclosing this in accordance with the Federal Trade Commission’s 16 CFR, Part 255: “Guides Concerning the Use of Endorsements and Testimonials in Advertising.”