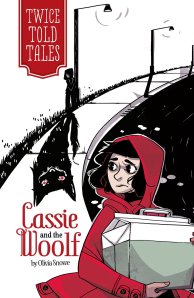 Twicetold Tales: Cassie and the Woolf

“Once (or twice) upon a time, a girl named Cassie brought supper to her grandmother. But in this retelling of Little Red Riding Hood, Cassie doesn’t know that Caleb Woolf gets to her grandmother first. When Cassie finds out what Caleb has done, she is determined to get revenge. Whatever it takes, Cassie is ready. She will fight the Woolf . . . “

“Cassie Cloak held her red raincoat closed at the neck.”

Cassie Cloak stops at a deli after school then delivers supper to her grandmother. Caleb’s basketball game with friends breaks up leaving Caleb alone and hungry, but unwilling to go home. He can smell the chicken soup and sandwiches in Cassie’s deli containers as she dodges the rain. He also hears Cassie decline a ride from the deli man and the address of grandma’s apartment complex. Caleb times it so he “runs into” Cassie on the street, but is not the most cordial guy. Cassie is glad when he leaves.

At grandmother’s apartment complex, Cassie checks on grandma but collides with the bathroom door instead, falling unconscious to the floor. Later she unties grandma and realizes the black hoodie left in the bathroom belongs to Caleb. He had ambushed grandma, knocked out Cassie, and left with their supper. Cassie and grandma plan their revenge. Cassie invites Caleb to dinner. He accepts, planning to retrieve his hoodie before anyone else sees it. (He figures Cassie had not seen it else, she would not invite him to dinner. Or was it a trap.) Caleb went back and forth with this debate throughout the day.

Grandma opens up windows so the smell of her soup and roast will flow down the street, enticing Caleb. She knew Caleb could not resist the aroma of her cooking, just in case he was going to stand her up. Promptly buzzed past security, Caleb walks through grandma’s ajar apartment door, which shuts quickly behind him. Caleb announces his presence, but hears nothing in return. He is alone. With the doors are locked—from the outside—and the windows are sealed shut, no one can hear Caleb when he realizes the horror of his mistake.

I read Cassie and the Woolf in one sitting. The story is a mere 128 pages but I couldn’t put it down if broccoli began to burn on my stove, again. It is that good. This modern retelling’s setting is an after-dark dangerous downtown. Most every shop has closed and Cassie and Caleb pass no one on the streets. Add in a fierce rainstorm and the elements are set for a horror showdown. Caleb is a brut of a boy with little manner or social skills. His claim to fame at the middle school he shares with Cassie is his basketball skills. When they meet, Cassie has no idea who Caleb is and it might have turned his anger uglier. He proceeds to bounce his basketball into a puddle, soaking Cassie. It is no secret what Caleb Woolf—the wolf—is going to do at Cassie—Little Red’s grandmother’s home. It is what happens after that will draw readers in the most. 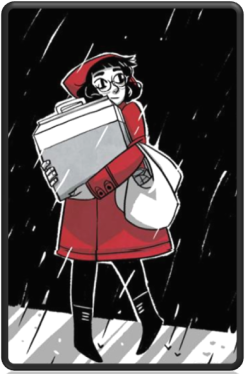 Both Cassie and her grandma are formidable foes, unlike the original story where the wolf eats them both. In this retelling, the woolf, I mean wolf, will get his due. What happens when Caleb finds himself trapped inside grandma’s apartment will not scare anyone. I quite enjoyed the scheme, not once figuring out what was happening until it happened. Even the ending threw me off. I can’t say much more or story spoils would fill the page. I will say the writing and plotting are masterfully done, never letting the reader figure out the next step until Cassie and grandma take it.

The characters are believable and easy to care about, including Caleb Woolf. You have sympathy for him shortly after meeting him, alone, his stomach growling, and unable to go home. He slowly turns into the wolf. As he walks with Cassie, he slowly becomes more annoying. After he has eaten Red’s supper, Caleb’s stomach hurts from over ingestion and he actually feels a bit remorseful, though I think he is confusing gastritis with remorse. I felt bad for Caleb at that moment—a little—and hoped Cassie’s revenge would not hurt him. But then the following day Caleb treats Cassie unkindly and the sympathy waned. Caleb’s character is a rollercoaster between decent and awful. 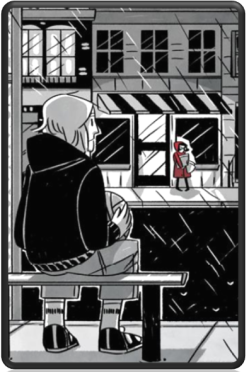 Middle grade aged kids will enjoy Cassie and the Woolf. Nothing in the story will spark nightmares or upset kids in the least—unless they are a fan of the wolf. No one dies; no one is shot, knifed, or beat up. Violence is at a minimal level. Suspense rises as slow as possible once Caleb enters grandma’s apartment and finds he is alone. From the moment Caleb sees his washed and folded hoodie, he knows something bad is going to happen; that he had walked into a trap. Readers who open Cassie and the Woolf will find they love the build up, the suspense, the basketball-bouncing walk through downtown streets, and the dinner invite given at school. Cassie and the Woolf is a fun read and an excellent modern retelling of Little Red Riding Hood. Middle grade and older kids will enjoy this fairy tale once more. I’d expect nothing less from an author whose last name is Snowe.

Purchase Cassie and the Woolf at Amazon

A Home in the Sky (Twicetold Tales)

Beauty and the Basement (Twicetold Tales)

Dandelion and the Witch (Twicetold Tales)

The Girl and the Seven Thieves (Twicetold Tales)