Congratulations to Julie Anne Grasso, on the release of her third chapter book: Frankie Dupont and the Mystery of Enderby Manor. No cinnamon this time, but there is a strange gnome, a parrot sous-chef, and a clueless inspector who fears Frankie will solve the mystery before he gets his first clue. Enjoy the fun. (Stay out of the pool.)

Frankie Dupont And The Mystery Of Enderby Manor

“When his cousin Kat disappears from Enderby, Frankie Dupont jumps on the scene, only to find bumbling Inspector Cluesome beat him to it. Cluesome thinks Kat simply wandered off. Frankie isn’t buying it.”

“Frankie bounded across the veranda and down the old wooden stairs.”

Frankie Dupont is waiting for something important in the mail—a black envelope. He is the son of a private inspector and wants to be an inspector like his dad. The strange black envelope arrives, but Frankie simply puts it in his pocket. When the phone rings, he expects it to be his cousin Kat, who calls him every day. It is not Kat. It is about Kat. Kat has disappeared.

With his father away on assignment, Frankie takes on the assignment of finding Kat. Last seen at Enderby Manor, Kat ate an early breakfast and has not been seen or heard from since. Frankie passes Enderby Manor every day as he walks to school, yet he has no memory of ever seeing the place. Strange for an investigator to miss a large hotel, sitting behind the lake—which Frankie has seen—all of which is situated behind a black iron fence.

Inspector Cluesome is already on the scene when Frankie rides up on his bike. His aunt and uncle are frantically worried. They trust Frankie, which is good since Cluesome is extraordinarily clueless. Without any real detective work completed, Cluesome announces that Kat simply got lost and will come home at any minute.  Can Frankie find his cousin? Why couldn’t Frankie recall a large hotel he passes every day on his way to school? Will this unseen hotel figure into Kat’s disappearance? Where is Kat? 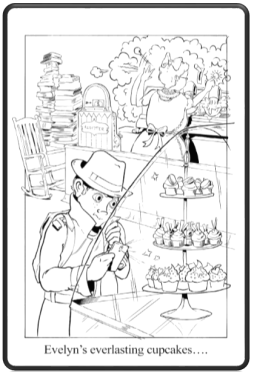 Enderby Manor is a strange place. The hotel itself is outdated, caught in a ten-year vacuum. The six-fingered chef has a parrot for his sous-chef. The maid, also the owner’s wife, keeps waiting for her husband to return and open the hotel—the Grand Opening. He will not arrive since he has been dead for ten years. Out back, a gnome named Gerome cares for the landscaping and the pool—but not the water. No one knows anything about Kat except the chef. He fed Kat an early breakfast, which she ate in the kitchen.

The grounds are as crazy as the people running the hotel are. The pool has  brown-slime covering the top of the water. Kat

could not have swum that morning as some have suggested she did. Then there is Myrtle’s Mesmerising Maze, which Frankie felt a pull to enter. He didn’t, instead he went to Evelyn’s Everlasting Cupcakes, a shop with the most delicious cupcakes ever made; yet the place was empty. Frankie even loses it a little. He thinks he sees Kat in a mirror, but only for a nanosecond. Who knew he had a wild imagination.

Kids will enjoy Frankie Dupont and the Mystery of Enderby Manor. For this story, the only place you will find cinnamon is at the cupcake shop, baked into the sticky caramel cupcake. Kids will like the crazy characters Grasso developed. Cluesome is a bumbling idiot, which kids will love. Frankie outwits the inspector at every turn. Igor the Great has the funniest lines in the story.

Grasso laid out the clues in such a way that Frankie will decipher them before the reader. Most of the fun comes from trying to put the mystery together and not being able to until the author wants you to understand. Still we try our darndest to figure out what is going on. What is going on? Frankie seems as confused as we are, until . . . then the story speeds up as the entire world collapses. Oh, what wonderful fun! 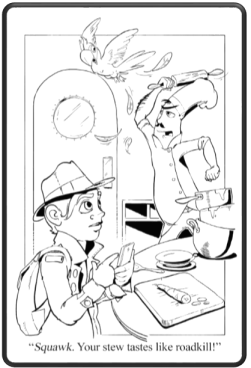 Purchase Frankie Dupont and the Mystery of Enderby Manor at Amazon

Learn more about Frankie Dupont and the Mystery of Enderby Manor HERE.

Meet the author, Julie Anne Grasso at her website: julieannegrassobooks.com

Meet the illustrator, David Blackwell, at his website:   http://www.kathyanddavidblackwell.co.uk/     http://drawshootmove.com/

Meet the other illustrator, Samantha Yallope, at her website:   http://www.samanthayallope.com/

Escape from the Forbidden Planet