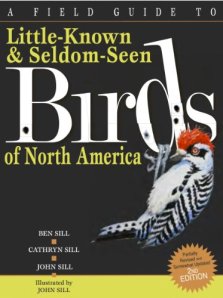 Website:  Bird enthusiasts will love this revised edition of the feather-brained field guide parody! Birders and just about anyone who likes birds will delight in this field guide parody. Thirty-two fabulous new species are depicted in this volume, which features tongue-in-cheek descriptions, observation hints, and range maps, as well as remarkable full-color illustrations. The reader will never look at our feathered friends in the same way after encountering these frequent flyers.

Opening:  INTRODUCTION – Now, twenty-five years later, we are pleased to say that the birds described in this updated volume are not only accurate, but also artfully arranged and sufficiently ambivalent. . . . We are not too proud to admit that mistakes made in the first edition were the editor’s fault.

About the Field Guide:  This field guide presents various birds one will rarely see unless one is at the right place and at the right time. Divided into colorful sections, this bird field guide becomes an easy reference. For example, if looking for the Green Plumivore you would naturally look in the green section, as there is no plum section. Likewise, the Middle and Least Yellowlegs are in the Aqua section.

For each of these uniquely little-known birds, you will learn several until-now-known unknown facts. This includes—when known—geographic location, feeding and courtship habits, special skills, and fun facts. The illustrator has depicted—in full-color—a detailed image of each bird. There is an exclusive essay entitled, Are There Any More Bird Species to Discover?

The authors have included a form to fill out should you see an undocumented little-known or seldom-seen bird. The glossary makes normal stuffy birder terms understandable and sometimes just plain fun. Oh, there is a reference list of helpful books for further reading, but A Field Guide to Little Known & Seldom-Seen Birds of North America really should suffice.

What I Thought:  A Field Guide to Little Known & Seldom-Seen Birds of North America is a fantastic bird book. I am not much “into” birds, yet several caught my attention. One of those is the Eastern Spider Spitter, which I hope like to live indoors. I do not like spiders and this bird, this wonderfully yellow shaded bird with the perfectly round beak, is the spider’s worst enemy. The Eastern Spider Spitter

I love this bird’s chubby little cheeks. How does one locate the Eastern Spider Spitter? The authors state the Spitter is easy to spot,

“since the Spider Spitters spew spent spit, splattering spongy spray spots all over the place.”

A Field Guide to Little Known & Seldom-Seen Birds of North America is chock-full of spectacular birds for any occasion. Consider hunting season. I am not an advocate of this activity and never will be. I also am not suggesting this to anyone. Yet, the Long-Range Duck Target is the perfect bird for hunters to spot, while bird watching. This beautiful bird has a green crown and a bright yellow beak. It sits symmetrically still in the water, when it lands for a drink.

The spectacular Long-Range Target Duck, best seen as it flies to its top altitude of 153 feet and fully spans its wings, presents a perfectly dead-center circular target. One subspecies makes lower Canada its nest. The Canadian bird is identical to its southern cousin, until the wings spread apart to reveal a bright red spot dead center in the bird’s belly eyespot.

I like two other rare birds quite a bit. With the holiday season approaching and snow soon falling in heaps, the time will be right to spot the Skia and the Circular Dove. The Circular Dove looks similar to a turkey, which makes me think of Thanksgiving. This tan and brown dove’s sex is determined by its legs. The male has a longer let leg, the female a longer right leg. Males walk/fly clockwise and females counter-clockwise. The mating season is difficult to determine. The western species fly in wider circles than its eastern counterbird. Each species flies up and down its respective coast in circles, occasionally stopping to throw-up (no, I just made that up).

Finally, the Skia is the perfect bird for wintertime bird watching. You will find this gorgeous blue trimmed bird, with a nice blue “cap” on its head, enjoying the season within a short distance from mountains and tall hills. The Skia was an all (North) American bird until recently when it isolated into subspecies. The most remarkable feature of the Skia—and you will know you have seen a Skia by this feature alone—are their feet.

The northeastern Skia has the longest feet, approximately six times the length of its leg, and are now Nordic Skia. The northwestern birds, with feet a bit less than four times the length of its leg, are the Alpine Skia. Finally, the southern birds, known as Water Skia, fly near lakes and bays. Their feet, similar to their Alpine counter-birds, have one significant difference: the “heel” curves down to help the bird glide better. Skia are easy to identify by their footprint.

A Field Guide to Little Known & Seldom-Seen Birds of North America is hilarious, but often in a subtle and subdued way. I love the irony some birds carry and the outright outlandishness other’s possess. This is a great book for anyone who loves birds and bird watching. In my house, the biggest and nearly constant bird watchers are my two kitties, and even though one loves to bite book covers, these felines view reading as over-rated.

The original guide first came out 25 years ago. I suspect this guide will not update for another 25 years. Then again, it took the Sills some time—I am not sure how much, but at least some—to locate and document these rare birds of North America. If you like to watch or find birds, in the great outdoors or on Animal Planet, this is the bird guide for you. I have found this guide indispensable in my daily life and you will too. Kids, this is the best first guide you can get. Scouts may want to check with their leaders first (some–jealous–experts call the Sills birdbrains).

© 2013 by Peachtree Publishers, used with permission