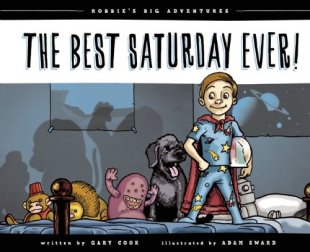 Back Cover:  On a rainy Saturday, power goes out. With no TV and no chance of going outside, Robbie wonders how he could possibly have fun! With his imaginations going wild, will he even notice when the rain stops and the lights come back on?

Opening:  The weekend’s finally here. And that means no school today! Hey, what’s going on? Why is it so gray? It’s storming outside. The rain’s all I can see.

About the Story:  Robbie wakes up on Saturday to a gloomy, rainy day. Soon all the power goes off, leaving him without video games and television. Mom assures him he can have a great time without TV. Robbie takes one look at the hero on his wall and has an idea. Robbie transforms himself into “The Amazer,” ready to guard the entire city.

With his own rocket, Robbie safeguards the galaxy with his trusty sidekick, Tobor. Is that the circus? Robbie could be the ringmaster and lead the circus under the Big Top. Wait, what if . . . the lights burst on, the rain dries up, and his friends are outside? Not looking very happy, Robbie looks outside and dresses. On their out, Robbie tells Sparky, his dog, to hurry before they miss “another world of fun.”

What I Thought:  The Best Saturday Ever! is a testament to the resiliency of a child’s imagination and spirit. Having looked forward to Saturday all week, Robbie finally has a day off from school and BIG plans. Mother Nature has bigger plans and sends a storm barreling into town, knocking out the lights and taking out a tree. Now stumped, Robbie has no idea how to have fun.

I like how Robbie took one look at a superhero and his imagination kicked into gear. First, he makes himself a costume and turns into his own superhero, saving the planet from evil, gooey monsters. His attention turns to another object and his character and adventure shifts gear. Robbie becomes so engaged in his imagination that when the sun comes out–and then his friends–Robbie looks upset. Soon that resiliency steps in and Robbie realizes there are adventures waiting for him outside.

© 2013 by Scarletta Kids, used with permission