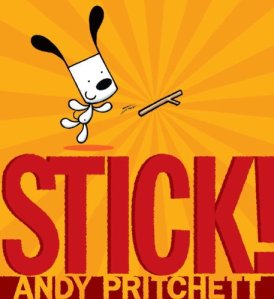 Inside Jacket: Sticks are great.  Puppy loves his new stick.  He wants to play!  Now he just needs someone to play with . . .

About the Story:  Puppy has a new stick ad wants to play.  He asks several animals to play, but they are more interested in other things, like grass and worms.  All puppy want to do is play with his stick just not alone.  Will he ever find a friend?

What I Thought:  Here is the challenge.  Write a 32-page picture book, full of humor, suspense, disappointment, and glee using SIX words.  Not a typo.  Use only six—6—words.  Can you do it?  Andy Pritchett did just that.  Stick might be the shortest story ever told.  The white puppy with black ears asks his animal friends to play.

Cow is busy eating.  His response is as simple as puppy’s question.

Bird and Pig are also busy.  Puppy tosses his stick away, upset and alone.  Rain has stripped the bark off Puppy’s stick.  The illustrated rain is in a conversation bubble above Puppy’s head.  Suddenly, a . . ., wait, I cannot tell you what happens.  That would be a canine crime.  I will say the ending would make a tomcat purr.

With so few words, this tail, um, tale is actually quite an endearing story.  The Puppy’s repetitive question, Stick, is a good way for young children to gain mastery over a picture book when first learning to read.  Uncomplicated illustrations tell the bulk of the story.  I wish an illustration or two were available.  (A few can be seen in the interview linked below.) I especially like the look on Puppy’s face—his whole body—when something big happens.  His eyes bug out.  Four completely stiff limbs fly out from his body, which has leapt a few inches off the ground, and his ears point to the heavens like two exclamation points!

Stick is Andy Pritchett’s debut.  The illustrations may be as sparse as his words, but the messages Andy conveys are in complete sentences.  Children will love Stick, as will their parents.  Kids can sit and read Stick by themselves even at a pre-reading age and understand the story.  I think Mr. Pritchett’s debut is simply genius.

Candlewick Press is part of the Walker Books Group

DONATED TO A LOCAL PUBLIC OR SCHOOL LIBRARY