#282 – The World of the Polka Dot Bear by Steve Sandler 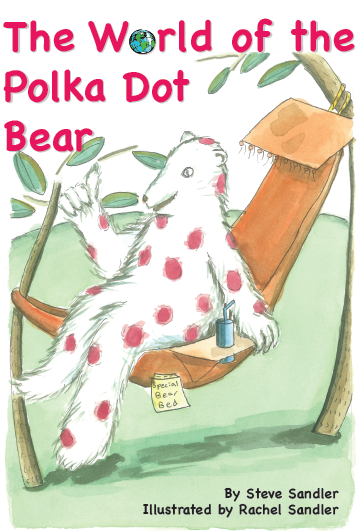 The World of the Polka Dot Bear

Back Cover:  Ursus Pandanther, the world’s one and only Polka Dot Bear, befriends a camel named Ted.  Together they create Sweet Jake, a rhino, who is zapped to life by a lightning bolt.  They all live in the bear’s great house on the mountain with the ever flowing (sic) Soda Pop Fountain.  Ted and Jake have wild ideas about activities to engage in for their amusement.  Ursus suggests they do good deeds instead and he knows exactly what their first project should be.  Enter Rachel McWhirl, who is in need of a new residence.  She accepts their offer with the understanding that the fellas are always welcome for Sunday dinner in her new home.  Our gallant trio springs into action and after a week of toil present their special gift to Rachel.  They briefly go back to the house on the mountain to rest, make comically stylish fashion choices and return for the first Sunday dinner.  Rachel’s final question and the answer of the three good Samaritans reveal the simple truth behind why we should all strive to do good deeds.

The back cover does a great job of explaining the gist of this story.  Polka Dot Bear and his friends, Ted the camel, and Sweet Jake the lightning bolted rhino, decide to stop playing around and make good use of their time, helping those in need.  First on Bear’s list is Rachel McWhirl who is living in a rundown shack by the lake.  Together, the three friends build Rachel a lovely white house with a wrap-around porch.  Now a group of four friends, they take Sunday dinner together, which also gives Rachel companionship at least once a week.

The World of the Polka Dot Bear is a lovely story.  It often rhymes nicely, making it easy to read aloud at bedtime, or any time.  Kids get the message that doing for others will come back to you in time, and is simply a nice thing to do, instead of wasting time with things such as video games and Facebook.

The illustrations are by the author’s daughter, painted by hand in watercolors.  The Polka Dot Bear looks a bit odd when he stands, but considering that his fur is loaded with red polka dots, an awkwardly tallish figure is not a character killer.  The Bear is sweet, generous, and thoughtful, and thus needs a lot of room for all that niceness. The crazy hat wearing—on his humps—camel has some vicious looking teeth and can stand on two hind legs.  The rhino is an interesting fella, having been born by a bolt of lightning hitting his snout.  He looks just like a rhino, but then he was not born but made of clay.  The illustrations will amuse kids as will the story of these three good Samaritans.  I think The World of the Polka Dot Bear will be a nightly request, so parents, practice those animal voices.

The World of the Polka Dot Bear